Welcome to St Albans Trapeze and Aerial Arts. We offer classes for adults and children in static trapeze, aerial silks, aerial yoga and more in a friendly and welcoming environment.

We are not currently running any in-person classes until restrictions are lifted.

Online kids' workout classes are now available every Tuesday 11am and Thursday 9am!

We are St Albans' first aerial community. We offer a range of classes for adults, children and teenagers on static trapeze, aerial silks, corde lisse, aerial yoga and aerial hoop in St Albans and Harpenden

We believe that trapeze and aerial arts can be learned and enjoyed by anyone. If you want to get fit, strong and flexible in a fun way - or simply if you've always dreamed of running away to the circus! - our classes are for you. There's no upper age limit and you don't need to have any prior experience to take part - just a willingness to give it your best.

Static trapeze is our bread and butter - it's what we start our beginners on and it's our most popular piece of equipment. Not to be confused with flying trapeze, static trapeze is all about making strong, beautiful shapes while you move your body around the trapeze. We also teach basic doubles trapeze on request.

With billowing ribbons of fabric and seemingly death-defying drops, aerial silks performances look glamorous and daring - but be warned, these stretchy pieces of fabric can be tricky to conquer at first! However, the feeling of defying gravity is definitely worth it.

Increasingly popular in recent years, the aerial hoop (or lyra as it is sometimes known) offers huge potential for a variety of different tricks, poses and spins.

Also known by its fancy French name, corde lisse, aerial rope is exactly as it sounds. While we always teach basic rope climbing as part of our classes, the art of aerial rope offers so much more and will do wonders for your fitness.

Two straps with loops for the hands attached to a pivot, aerial straps require extreme strength and precision in order to successfully execute tricks and moves. Not a piece of equipment for those new to aerial! Taught on request by straps artiste Leanne Laird.

A fusion of aerial arts and traditional yoga, aerial yoga offers a mindful and relaxing way of increasing flexibility, mobility and strength, as well as improving posture. 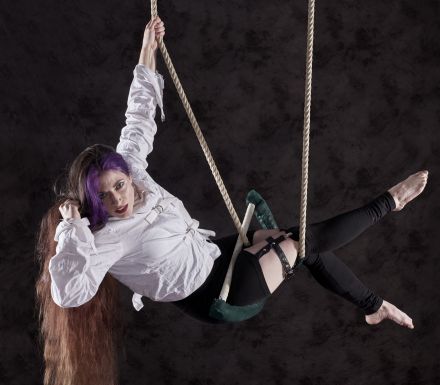 A professional aerialist and performer for over 10 years now, our lead instructor Leanne Laird first started training in aerial arts at Circomedia, where she specialised in aerial acrobatics. She has since performed in venues including London's infamous Club Antichrist and for a variety of agencies. Leanne has a comprehensive knowledge of anatomy and its application to aerial activities and injury prevention. She recently spent three months training aerial full time at Greentop Circus in Sheffield in 2019, as well as Cloud Aerial Arts in Manchester in summer 2020, where she specialised in aerial straps.

While Leanne devotes most of her energy to straps (a physically demanding discipline not to be undertaken without prior aerial experience), she has a diverse knowledge of all the main aerial apparatus including static trapeze, aerial hoop, corde lisse and silks. She is available for intermediate and advanced teaching and private lessons on request.

Leanne can be found on social media as @leannelairdaerialist. 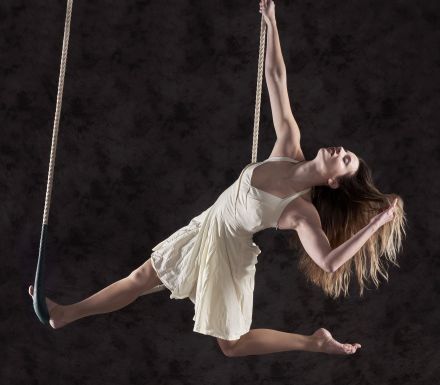 Ali is our resident aerial yoga and yoga teacher and is also in charge of social media, marketing and website communications for St Albans Trapeze.

Ali has been teaching aerial skills for over six years now. She studied and trained aerial arts for three months full time at the Essential Aerial Professionals course at My Aerial Home in London in 2017 where she specialised in solo static trapeze.

Ali will be taking a break from teaching classes from February 2021 indefinitely.

She can be found on social media as @alidoesaerial and @aerialyogawithali. 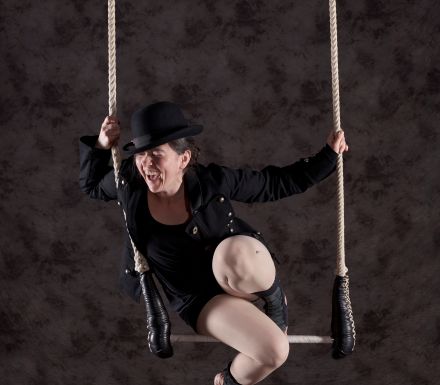 Former Opera House lighting technician Kate became hooked on trapeze at London's Circus Space (now the National Centre for Circus Arts) when she joined their adult programme in 1998 - there she discovered the joy of hanging upside down by unexpected parts of the body on a variety of pieces of equipment, including static trapeze, corde lisse and silks.

She continued training there just for the fun of it until having children seven years later. She came to St Albans to retrain in 2012. Kate is our manager and head of health & safety and aerial rigging. 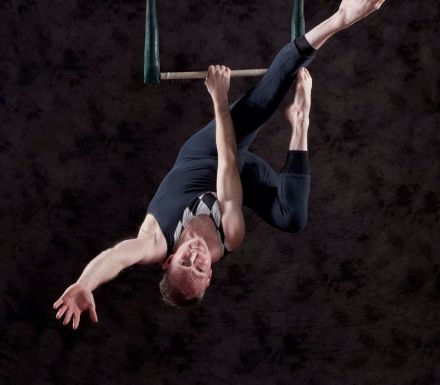 Despite not discovering aerial until his early 40s, Pete, 56, is now an enthusiastic proponent of the benefits of aerial skills for everyone. He has been practising at St Albans for over 10 years now, and most enjoys doubles trapeze, silks and partner acrobalance.

He currently attends many aerial and acrobalance conventions up and down the country, and also trains regularly at the Cambridge Circus Community. He also built this website!

Aerial skills are one of the most effective ways to improve strength and flexibility in a very friendly atmosphere. Skills can be adapted to all abilities. It's also a lot of fun!

We've put together answers to some questions we're often asked.

For any other queries about classes, parties or private sessions, just drop us a line.